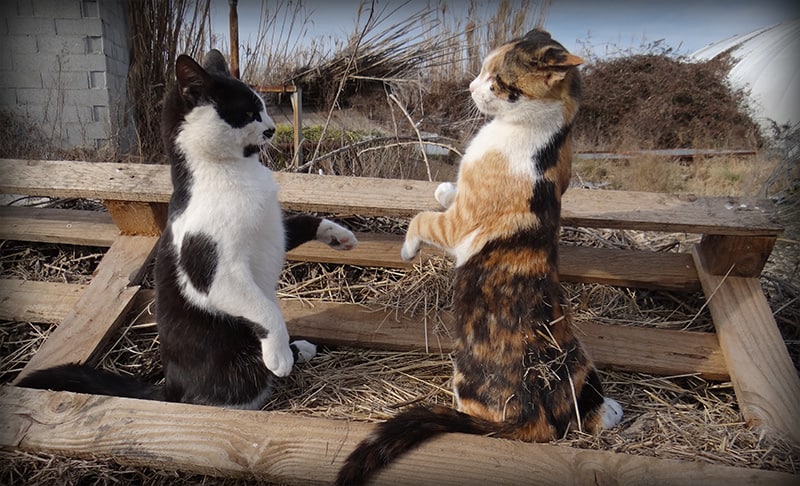 Introducing a New Cat To Another Cat

What could possibly be better than a cat? Another cat!

You’ve decided to get another cat (we’re all very happy for you), but you’re not sure how to go about introducing them to your existing cat(s). Whilst you hope that they will become the best of friends and you’ll be able to snap lots of pictures of them cuddling up on the sofa, you’re also concerned that your home is about to turn into a territorial war zone. The best way to ensure cats get along is to plan their introduction carefully.

If you throw two cats into the same environment without much planning then you’re pretty much guaranteed issues. However, careful consideration of how you will introduce your cats may help them become lifelong feline friends.

Even if your current cat is an absolute angel with you, you don’t know how they’ll react to another cat in their midst. Fortunately, you are not alone as many cat owners have navigated the same tricky introductions. We’ve gathered up the best advice on how to introduce a new cat to another cat so that you can have a happy, peaceful home.

*Warning: Should You Get Another Cat?

Before we begin on how cats should be introduced, it’s important to consider whether you should even be getting a second cat. Whilst many cats can become companions and enrich one another’s lives, some cats are not happy existing alongside another cat. It isn’t fair to bring a new cat home if you think there is a high chance that your existing cat won’t get along. You might even end up having to give one of the cats to another home if problems persist, which would be very unsettling for them.

Whilst there are things you cannot predict, consider how your existing cat interacts with other cats now. Do they start fights with neighbourhood cats? Are they aggressive if they see another cat out of the window? Consider this behaviour and be prepared for a bumpy ride if you do bring another cat into the house.

1. Keep Your Cats Separated At First

Begin by keeping your new cat in their own safe isolation room at first. This will provide them with a safe space to get familiar with their new surroundings. Whilst this is generally good practice with any new cat, it’s essential when you are bringing two cats together. By keeping your new cat in a separate room, you are also able to control how and when your cats meet one another and avoid any unsupervised scuffles.

Your new cat’s room should have everything they need: litter box, food and water, somewhere to snuggle up and some toys/scratching post. 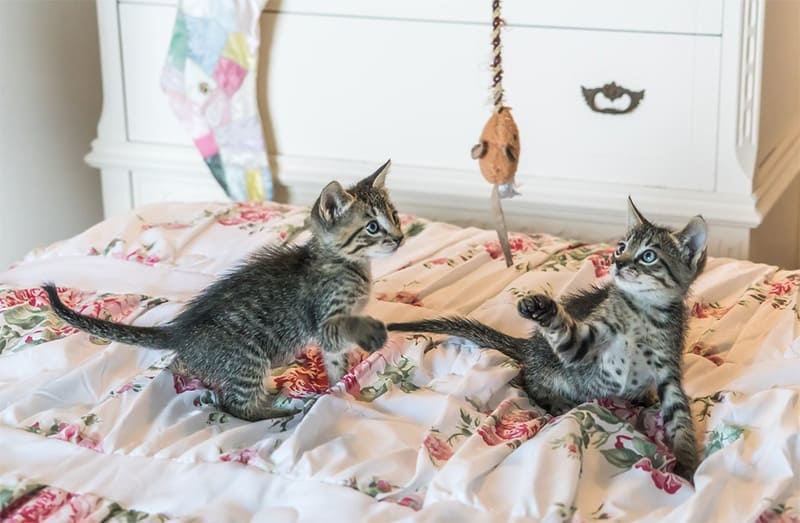 You can begin to get the cats accustomed by allowing them to smell one another. A good way to do this is feed both cats on either side of the door that separates them. Then they are likely to associate one another with a positive experience. You can also play with the cats near the door, again so that they begin to associate the other cat’s smell with a positive experience.

After a few days, consider switching the cats’ locations so that they can become familiar with one another’s smells. If that isn’t possible, you can also rub the new c at with a new towel/piece of cloth, focusing particularly on their face. They leave this item in a room with your existing cat and allow them to investigate in their own time.

If your new cat is showing signs of frustration being confined in one space, then consider allowing them access to another room or corridor that your existing cat doesn’t have access to.

2. Slowly Allow The Cats To See One Another

If your cats aren’t growling at one another under the door, after a week they should be ready to begin seeing one another. Signs that your new cat is happy with its new environment include facial rubbing on furniture, normal eating and drinking, and friendly behaviours when you enter the room such as rubbing themselves on your legs and purring. S

Ideally, install a screen door or even a high baby gate that neither cat can jump over between the rooms. You could also tack up some chicken wire. If possible, have one human with one cat and one human with another.

Don’t force the two cats to look at one another, just keep playing or feeding them and act as you usually would. Let the cats become familiar with one another and continue their daily routines. Consider keeping the food dishes apart from the door at the beginning, even up to 10 feet, and then gradually move them closer to the separation point as days go on.

Once your cats are eating their meals next to the separation line, and seem comfortable with one another’s presence, it’s time to introduce them face-to-face. Don’t rush this process, it’s much harder to regain lost ground than to be patient at the beginning. 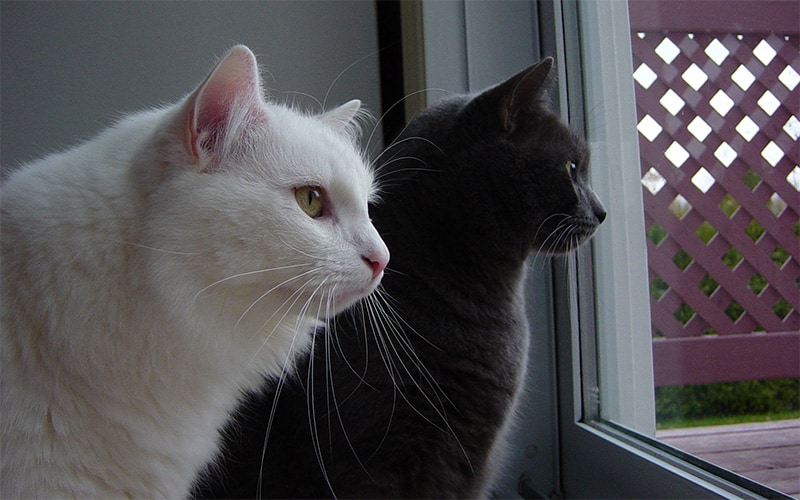 At first the cats should be supervised so that you can prevent any scuffles. Don’t worry if the cats totally ignore one another or even hiss to begin with. They will most likely take some time to get over this initial suspicion, even if you have been careful with every step up to this point. Just keep watching the cats, so long as there is no bullying or harassment then you can let them take things at their own pace. If there is a consistent issue with one cat dominating the other, consider consulting a professional behaviourist.

If you follow all these steps and don’t rush your cats into an introduction then it is much more likely that they will have a friendly, harmonious relationship. Many cats actually benefit from having a companion that they can play and interact with. As long as their first impressions go well then they should be friends for life.