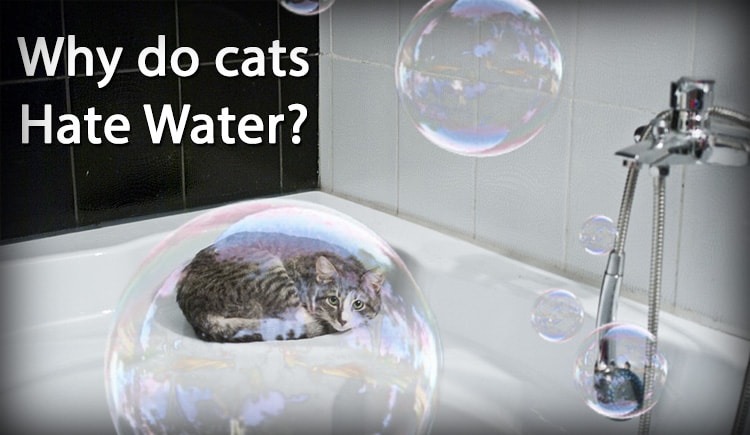 Why Do Cats Hate Water?

Stereotypical cat traits include: unfriendly, judgemental and aquaphobic. Whilst we as cat lovers know that the first two traits are very unfair to most cats, it seems that the third has quite a lot of truth in it.

Cats tend to be fascinated by water, often staring intensely at faucets, shower heads or hose pipes. Sometimes they’ll even dip a single paw into the bath, before quickly retreating. However, when it comes to actually being wet, for most cats it’s a totally different story.

If you’ve ever tried to get your cat in a bathtub, you probably got the scratches and scars to prove it. Cats’ dislike of bathing is particularly surprising when you consider that cats are extremely clean by nature, licking themselves constantly to remove any dirt. However sometimes that isn’t enough and you find yourself needing to give them a proper bath, despite the challenge!

There are many reasons why your cat does not like water, and some of them you probably haven’t considered before.

The first reason is that if a cat is submerged in water their coat will become saturated. This weighs them down quite considerably which can be very uncomfortable for a cat. Whilst the top layer of their fur is water-resistant to an extent, if the whole coat is drenched it will feel very heavy. It probably feels like falling into a swimming pool fully clothed- not very nice once you’re out!

Cats are naturally nervous and cautious, and so part of the reason they may not enjoy being wet is simply that it is unfamiliar to them. Cats which have regularly been exposed to water as kittens may be more accepting of being wet, however, some cats will never get accustomed to the feeling.

There are also evolutionary reasons why cats are averse to water. Modern, domesticated cats are the descendants of cats which lived in dry, arid areas. Whilst they might have caught the occasional fish from the riverbanks, there was never any evolutionary need for them to swim. Cats that did get in the water were likely to have drowned and so the genes from aquaphobic cats were passed down instead.

Having said all of that, there are some cats who seem to enjoy the sensation of water on their skin. This is particularly the case if a cat lives in a hot, dry climate. Water can then be a refreshing way for them to cool down so the cat may choose to sit or swim in it.

However, most cats don’t seem to like water and it isn’t wise to try and force them to get wet. If you’re lucky, you’ll escape with some scratches, if you’re unlucky, you’ll lose your cat’s trust entirely. If you need to give a cat a bath for medical reasons then fill the water beforehand (the sound of splashing water will make it worse), make sure it is warm and put a towel on the bathtub floor to allow your cat to grip something.

Does your cat love water for some reason? Let as know in the comments :]