This website is a participant in the Amazon Services LLC Associates Program. As an Amazon Associate I earn from qualifying purchases.
6 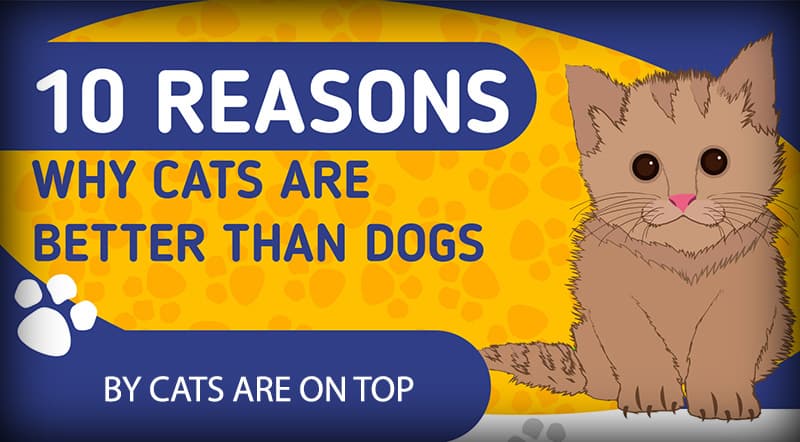 10 Reasons Why Cats Are Better Than Dogs

Cat lovers have a real affinity with their pets and cannot understand how anyone could feel any less than passionate about furry felines. Cats are the bees-knees, they are intelligent, independent, and make great companions. If there was a prize for “the best pets in the world”, cats would surely win!

All over the world cat lovers unite in their opinion – cats rule. However, their crown does not go undisputed, there are other pet owners out there who beg to differ. For some the phrase “dog is a mans best friend”, still rings true and dog owners are quick to point out that canines are just as intelligent as their feline counterparts, and that they make for much friendlier and loyal pets. But cat lovers won’t be swayed from the belief that cats are better than dogs, and here’s why.

Cats do not need constant attention, or someone to take them out for a walk, pick up their poop and groom them. As pets go, cats are pretty self-sufficient, they do have high expectations of their owners though, so make sure you provide well for your pampered puss.

Hugh-quality food, plenty of water, a cosy bed and entertaining toys should do the trick. Give your kitty lots of fuss and install a cat-flap, then he can come and go as he pleases Unlike a dog who will wait until you are settled down with a cup of cocoa and half-way through your favorite soap opera and will then barks to be let out for a wee!

Dogs are excited creatures, they often get overwhelmed by things – greeting people, finding a new toy, meeting other animals – you name it a dog can get carried away by it. They will happily bound up to your nearest and dearest, with no thought for personal space and will jump up in an over-enthusiastic attempt to say hello.

Cats are at one with the world and can navigate their way from their home, to their favorite destinations and back again – no human intervention required.

Quick witted cats also understand the need for rest and play, they will entertain humans by playing with a ball of string or toy mouse when they feel inclined, but are often just as happy to enjoy some serious R&R time. Dogs are often lead by their desire for treats, including walks, doggy snacks, and squeaky (and rather annoying toys), owners often use these tit-bits to get a dog to do what they want.

Cats aren’t inclined to fall for this trick, dangle a tasty kitty tit-bit in front of your puss, but don’t expect him to perform on command, if he’s not hungry or interested your cat is likely to give you a withering look and stalk away. Cats are clever cookies.

Phoebe of Friends fame made her name with the catchy “Smelly Cat” jingle, but let’s face facts – when it comes to the stinky factor, dogs win hands down. Aroma of dog is not a scent you want gracing your home, especially when guests call round (wet dog smells even worse)!

Everyone blames pongy farts on the poor dog, but the fact is that when your dog does pass wind it really does stink! Let’s not forget dog poop either – it looks and smells gross and there’s often a lot of it!

Worse still dogs aren’t really fussed about where they do their business, on the lawn, on the path to the front door, if they want to go they just squat, poop and then walk away. They aren’t bothered about leaving their poop lying around for unsuspecting pedestrians to step in.

Of course, dog owners can remedy this by collecting doggy doo doo in a small plastic bag, which they then have to carry around (how lovely)! Cats don’t come with such poor toilet habits, not only do they poop discreetly, they are also bright enough to learn how to use a litter tray, so can do their business indoors too!

Dogs sniff everything and anything from benches to the legs of human beings, to other doggie’s smelly butts.  Canines even have the cheek to poke their noses into the crotch of their owner, and worse still, into the crotch of visitors to the home.

It’s embarrassing and totally innapropriate!  Cats have far better manners and whilst they might like to greet visitors to the home they would never engage in such disrespectful behavior!

Cats do like to roam outside and we are not suggesting that they always have meticulously clean paws (they are just as likely to leave little paw prints on the clean kitchen floor) however cat paws are more delicate.

Dogs have a tendency to get as mucky as possible when they go outside, they roll in mud, run through wet grass and if they spot a large muddy puddle you can guarantee they will go for a splash (getting wet and grubby  in the process).

Yuk! Who wants dog slobber all over their new jeans? Dogs often lick everything in sight and produce a lot of saliva, which they enjoy sharing with other dogs and all of us.

Dogs take up quite a bit of space (especially the larger breeds) and won’t think anything of stretching out on the sofa or lying right in the doorway so you have to almost jump over Fido every time you want to make a cup of tea. Cats prefer to find a quiet corner and get cosy – much less intrusive!

If you’ve ever lived next door to a barky dog you will understand the annoyance it can cause, especially if it’s early morning or late in the evening. On top of barking you have growling, yelping, howling and whimpering – canines do have an impressive vocal range, and aren’t afraid to use it!

Cats also have a repertoire of sounds at their disposal, but a melodic meow and a pleasing purr are much more pleasurable to hear.

Ricky Gervais has a cat called Ollie who has his own Facebook Page!

Taylor Swift describes herself as a “cat lady” and loves her pet cat, Meredith.

What do I do with my cat if I go on vacation?
Cats Q & A – Part 2
Mouse Flavored Cat Food
Moving House With Tiddles
How Cats See the World
Share
Pin
Tweet